The dachshund is a short-legged, elongated dog breed of the hound
family. Pronounced däks' hoont, the breeds name is German and literally means
"badger dog," from [der] Dachs, badger, and [der] Hund, dog. While classified as
a hound in English speaking countries, some consider the classification to be in
error, speculating that it arose from the fact that the German word hund is
similar to the English word hound. In fact many dachshunds, especially the wire
haired sub type, exhibit behavior and appearance that is far more similar to the
terrier group of dogs . The standard size was developed to scent, chase, and
flush badgers and other burrow-dwelling animals, while the miniature was
developed to hunt rabbits. Due to the long, narrow build, they are sometimes
referred to as a wiener dog or a sausage dog. Not withstanding the German origin
of the dachshund's name, within German-speaking countries, the breed is
known—both formally and informally—as the Dackel or Teckel. 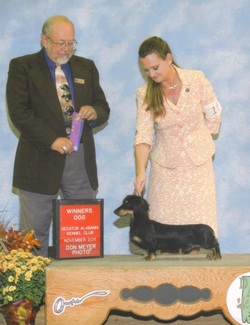